As I get older, I find it easier to stay in the moment.

Mostly because I can’t remember anything.

At the lab for a blood draw …

“Have you been fasting?”

Slightly alarmed, she replies, “It says here that you only need to fast for 12 hours.”

Internal monologue overheard at the airport …

“You should have kept your jacket.”

“A little bit. You know what would be perfect?”

“That would be perfect.”

How many boxes of these Thin Mints do I have to eat before I start seeing results?

I think calling someone ant-brain would have to be the worst insult you could call them.

I mean ants are really small, so it would figure that their brains are extra tiny.

But how do we know that ants even have brains? How would you dissect an ant? Who owns a scalpel that small and how would you wield it?

This actually happened to me. I’m in a cab on my way to the Mirage on the strip. I see this big sign that says, “Book Tours Here.”

And I think, “Oh cool. They’ve got a tour about books. I wonder what that’s all about. Man, Vegas has everything.”

The car pulls forward and I see another sign …

I went to Indianapolis for an event this summer. I was emailing back-and-forth with a woman at a sports organization and I posed a question. I wrote, “Hey, if you wanted tickets for our event, I’m pretty sure I could make that happen.

“Any chance you could get me a ticket for Bob Dylan?”

A couple days later, she shows up at the venue with an envelope. Contents: one general admission to Bob Dylan and Mavis Staples, plus a wristband. The concert is outside down by the river, just two blocks from my hotel. It’s hot out. 95 degrees. I get through security and I walk down by the stage, looking for a piece of grass to call my own. But I ask a security person, “Hey, where do I go? I got one of these wristbands, what does that get me?”

She points up the hill at a structure. “That’s the VIP section.”

I hustle up there. Behind the structure was a bar … with couches … outside. Sweet. I check out the seating and find out that the seats are ticketed. I find out when they kick me out of there. “You’ve got a general admission ticket; you have to sit on the grass,” I’m told. “But I’ve got one of these.”

I hold up my wrist. “Who gave you that?” she asked.

Fortunately, I brought the envelope. I pull out a business card. “Um, she did.”

It’s the business card of the CEO of the state park’s foundation.

The security lady was agitated, but she couldn’t argue anymore. She points me to the cocktail tables; they’re up for grabs.

I grab a four-top at the front of the U-shaped section. No one in front of me, next to me, near me, really. I have a perfect vantage point. It’s sunny out. I order a beer and food.

But near the end of Mavis’s set, I have to use the bathroom. Now what? I don’t want to lose my great spot, but I don’t know how to save it. I tip my chair on the table. I tell the waitress, “I’ll be right back,” and sprint to the bathroom. The VIP bathroom is an air-conditioned truck. I’m hit with icy cold air from five places.

This is nirvana. It’s so hot out, but not in the VIP bathroom.

But I can’t dawdle. I hustle back up the hill to my great seat. No one took it. I get another beer.

Mavis closes with The Staple Singers’ classic, “I’ll Take You There.”

The sun’s going down and the VIP section is filling up. There’s a long break while they get Bob’s stage ready. I have to go the bathroom again. CRAP!

I should say in my defense, the beers were those rare 24-ouncers. Had to use two hands to drink it.

I tell the waitress, “I’ll be right back.” I tell the guys sitting at the next table, “Don’t let anyone steal my spot.” I tilt my chair and then race to the icy cold restroom like a lunatic. I hightail it back up the hill. No one is in my spot.

Then I saw Bob. He was awesome. He sang, “Tangled Up In Blue,” my favorite Dylan song. When it was all over, I walked two blocks to my hotel. Perfect night. I even got my heart rate up a couple of times … running to the bathroom. 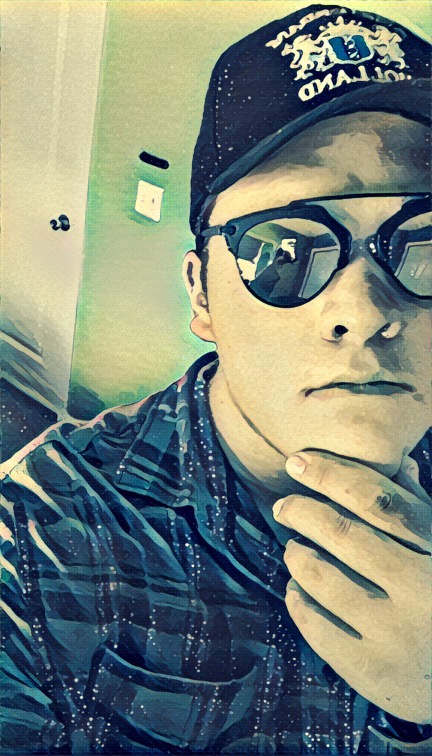 Sam went to his first concert, Chance the Rapper, at the Fillmore in Denver, a very cool artist to have as your first concert. Sam makes songs and beats with preset sounds and samples and puts them on Sound Cloud. He also took a class to make videos, writing, shooting, acting and editing.

He sang in the Southern Colorado Honor Choir down in Pueblo. He tried out for the State Choir and didn’t make it, but the silver lining was that his score was higher than Gina’s.

He has a girlfriend. She seems nice. From what I can tell. She and I talked once. I was watching Jeff Lynne in concert and I gave her the entire history of Jeff Lynne and ELO. She seemed enthralled to be introduced to this pivotal artist and soon-to-be Rock Hall inductee.

We went to another Nuggets game. Sam and Rose went to the Broncos games versus the Colts. He drives my car a lot. Early in the year I was sick in bed. Sam laid next to me and showed me my favorite performances from ‘The Voice’ on his phone. I liked that. 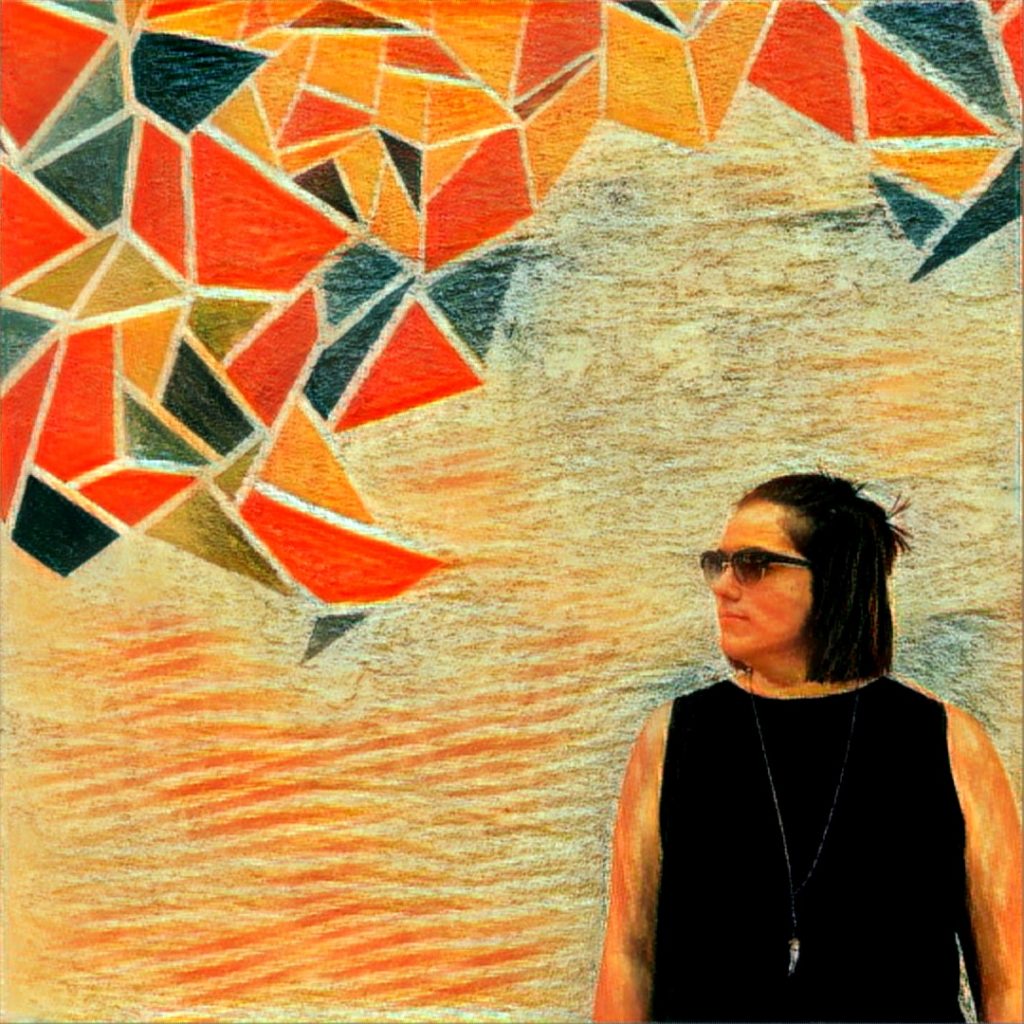 Gina had a busy year. Named Miss Rampart, Prom Queen, All-State Choir, Choir Student of the Year. She had a starring role in the spring musical. Graduated high school and picked a college. In the fall she moved to Washington to take classes at Pacific Lutheran University in Tacoma. That’s right, the same school Carli attends. She hosts her own radio show, ‘Currently.’ with your girl, Pineapple Emoji. (That’s her radio name.)

The night before she went off to college, Gina and I finished the series, Long Way Down, where Ewan McGregor and Charley Boorman ride motorcycles from Scotland to South Africa.

And wear a helmet. 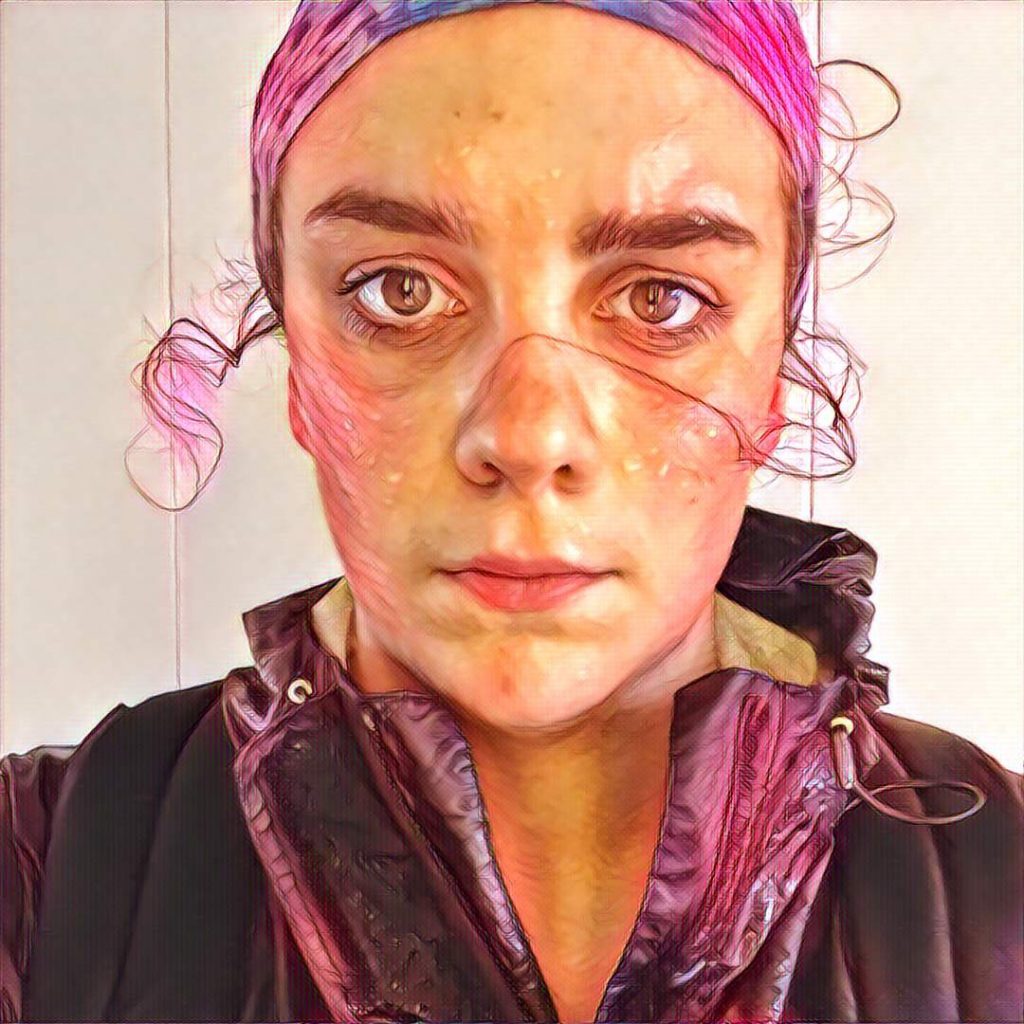 Carli lived in Europe for several months for a study abroad program. She took classes at the University of Amsterdam. She liked biking around in the wind and the rain (photo above). She visited Paris, Krakow, Hamburg, and Berlin. She joined a swim team made up of Dutch college students; they had a meet in Belgium. She was going to visit her Nana and Grandpa Chuck for her birthday in London, but that trip was cancelled when the Brussels train station was bombed the day before her trip.

Carli has been a Mayer Summer Research Fellow the past two summers and in October she gave a presentation during the Powell-Heller Conference for Holocaust Education for educators from around the country. She did a great job and many professors and teachers told her the same. Rose and I were very happy to attend and very proud of her.

Rose continues to run the Falfins Swim Club in Colorado Springs. The team is growing, swimming personal bests. Rose serves as meet director of many meets and runs a prosperous summer learn-to-swim each year; Carli and Gina are popular instructors with the little kids. She picked up a few consulting gigs this year.

What’s new with Rose? She has joined BNI, a networking group of business leaders and referral marketing program that meets weekly. And she got a new car that has seat warmers.

We enjoyed our trip to Tacoma where we not only saw Carli’s presentation, but Gina’s choir performance in the beautiful PLU music hall and had dinner with John and Sally Troup.

Rose and I enjoy the show, Game of Thrones.

We are fans of the show … we’ve watched every episode … but we’re not what you’d call, ‘Super Fans,’ and by that I mean, we still haven’t figured out any of the characters’ names.

Of course, we know Jon Snow. That’s an easy one.

And I do know Sansa and Cersei now, but for five years I just called them both Salsa. I had no idea.

Ask Rose right now what the name of the little guy is and I bet you a million dollars she says, The Little Guy.

I know that his name is Tiberius Lannister.

This morning Rose asked, ‘Where was the big, fat guy when Jon Snow was getting killed?’

“No, Big Fat Guy with that girl and the baby.”

I literally referred to Salsa’s little sister as Pointy Stick Girl just this morning. I don’t want to tell you what we call the Red Woman.

One of our favorite moments … when Big Blonde Lady saved Salsa.

We really love the show. Can’t wait to see what happens next. 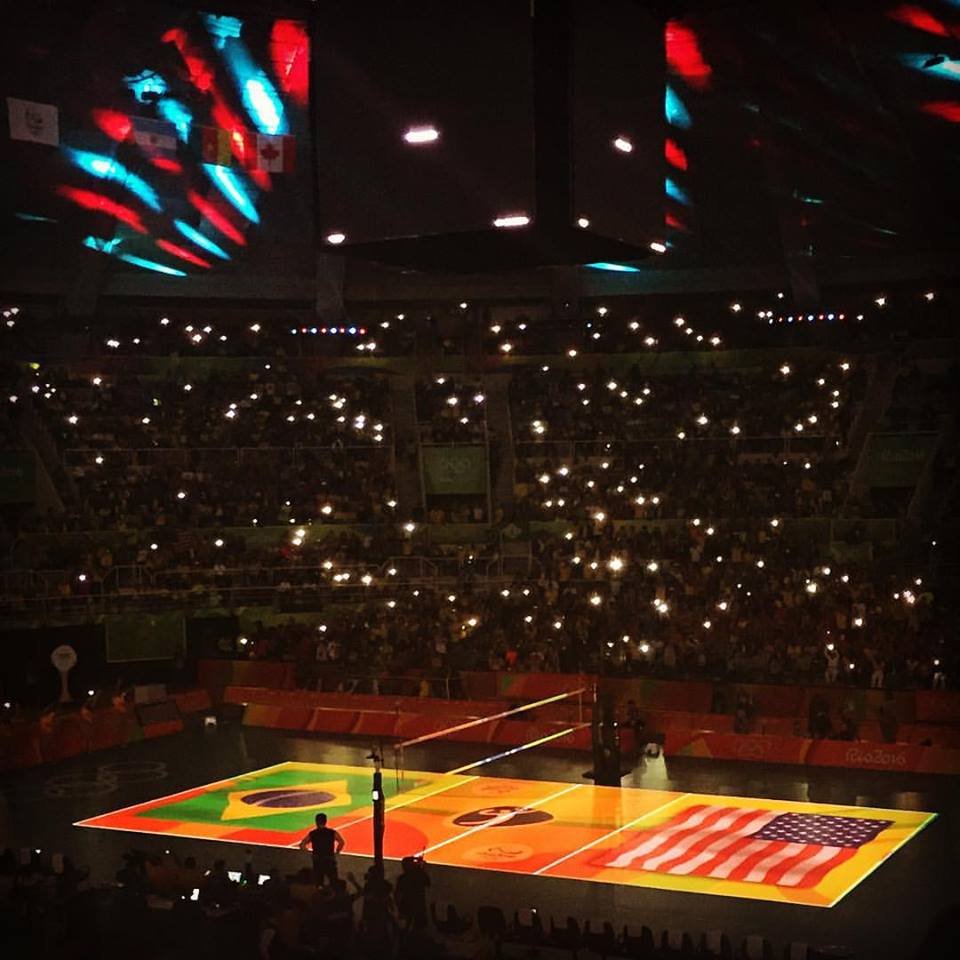 I went to my seventh Olympic Games this summer. I stayed in a hotel three blocks from the beach volleyball venue on Copacabana. I worked beach and indoor. We won three bronze medals and all of those matches were great. We have talented teams and players. The coolest moment was seeing our men beat Brazil, the number one team in the world and the eventual gold medalists. That was electric. I loved getting to know my tree-lined city neighborhood. Little things like ordering a ham sandwich, when you’re the only one in the place that speaks English.

We got to stay a couple extra days after the Games. 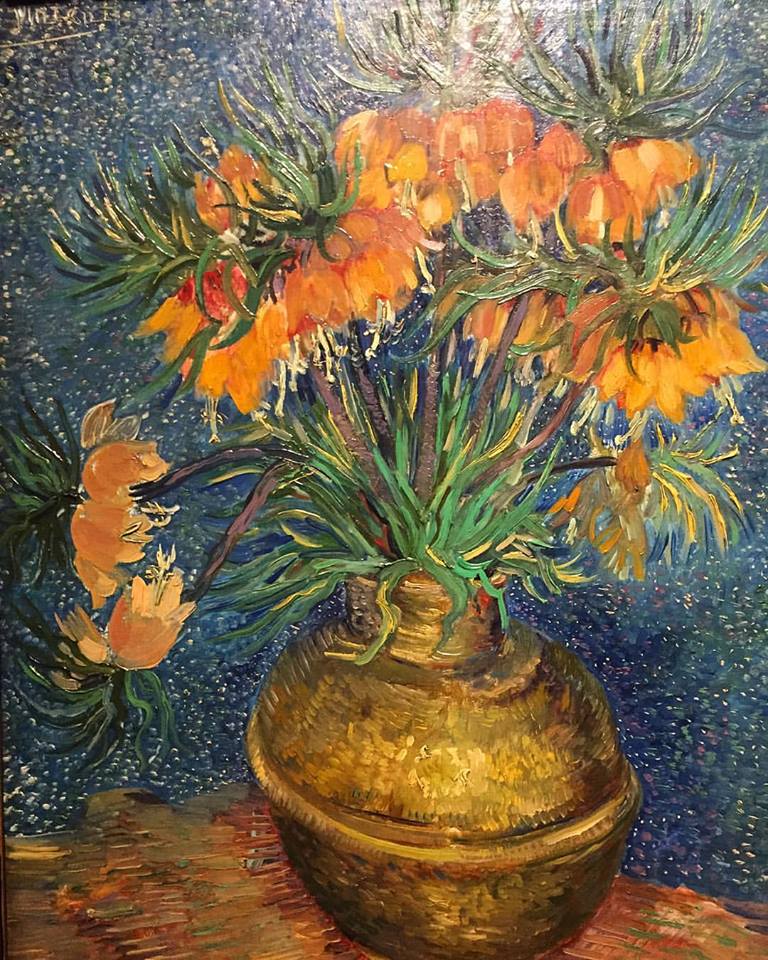 I went to an art museum housed in an old bank the day after the Closing Ceremony. The special exhibition was ‘The Triumph of Color,’ but I didn’t really know what to expect. The exhibition was timed, so we waited in a foyer for the doors to open. When they did, I saw a painting that looked very familiar. A Van Gogh still life with flowers in a vase. I texted Carli.

“This painting looks just like our print in the living room, but it’s so small.”

She sends me a photo of our print, which is way bigger than the painting. I check out the details and, sure enough, they match up.

The last time I saw that painting in person was 1993 in Paris at the Musee d’Orsay, when Rose and I were celebrating our first anniversary 23 years ago. It’s called ‘Imperial Fritillaries in a Copper Vase.’

But I wouldn’t want to paint it.*

This entry was posted in Christmas Letters. Bookmark the permalink.